These exhibitions were presented on the occasion of the 3rd Australia New Zealand Marine Biotechnology Society Conference at UNSW in 2019. They are a collaboration between The Global Water Institute, UNSW Library and the UNSW Art Collection.

This exhibition tells the story of the spiritual connection of the Yolngu to the land and the sea and the important role of art in expressing Yolngu cultural identity, asserting ownership of their traditional lands, and widening understanding and appreciation of Yolngu culture.

The Yolngu are the Aboriginal people of north-east Arnhem Land. Yolngu culture is strongly maintained, and Yolngu leaders have been prominent in Indigenous Australian peoples' struggle for land rights and recognition. In 2008 the Yolngu won a landmark determination of sea rights in the 2008 Blue Mud Bay case in which bark paintings were presented as evidence of their ownership of the inter-tidal zone on the edge of their lands.

The signs and symbols of Yolngu bark paintings are icons of origin, identity and place which reveal the spiritual forces behind the creation of the landscape and detail the relationships between people of different clans and their estates and waterways. Yolngu art is characterised by an intricate geometric style of meticulous cross-hatching of miny'tji (sacred designs). These fine linear striations create an effect of bir'yun (brilliant shimmer) which is regarded as a manifestation of Ancestral power. While working within established canons of art, Yolngu artists depict their subjects with innovation and individuality and this region is renowned for its many outstanding bark painters.

Chels Marshall is a Gumbaynggirr woman from Nambucca Heads on the mid north coast of New South Wales. In this exhibition, she presents a new series of artworks which draw upon her experiences as an Aboriginal person, a cultural marine ecologist and a scientist.

The ocean Gaagal is Chels' people's totem. Her practice as an artist is a way of giving back to the ocean by expressing its living moods and inviting thought about its future. She says:

To Gumbaynggirr people it is life. It is the nexus of culture and it is part of us,
it is the living entity that makes and influences who we are, how we feel and
our identity as saltwater people.

This exhibition was initiated through a partnership between UNSW's Global Water Institute and the Faculty of Art and Design. The aim of the partnership was to use art to create conversations around water management issues in Aboriginal communities. Through her art practice and in her role as an Indigenous ecologist, Chels creates partnerships in scientific research and cross-cultural method development. These Indigenous partnerships are critical in establishing conservation and management solutions to build scientific capacity and sustain both ecological and cultural diversity within marine environments. 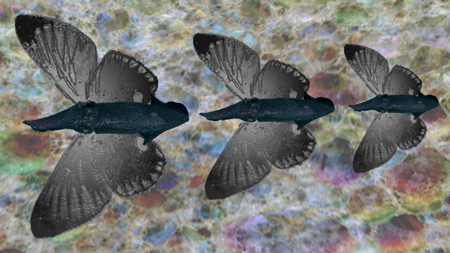